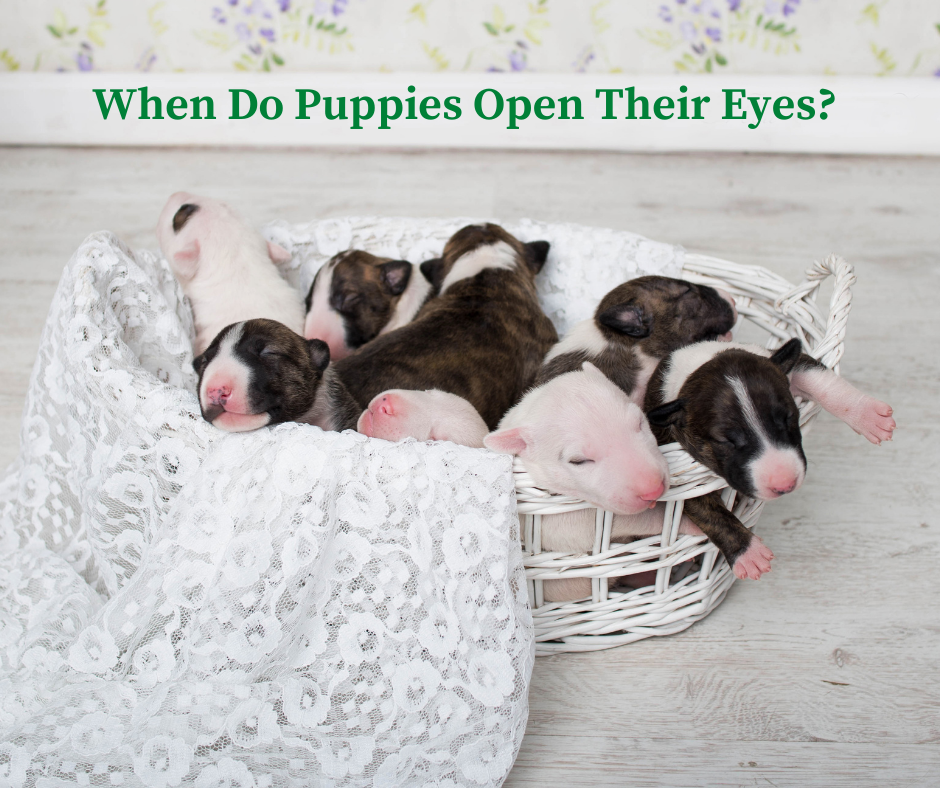 When do puppies open their eyes first? Between the ages of 10 and 14 days, a newborn puppy’s eyes open. And this is thrilling for both people who are seeing the pups develop and the puppies themselves. What should you anticipate throughout the first one to eight weeks of a puppy’s life?

Puppies begin their lives completely reliant on their mothers. They depend on their dog mothers to feed them, keep them secure, and even assist them in eliminating waste from their bodies. The first few days of a puppy’s existence may seem boring since they are mainly sleeping, yet many significant changes are taking place for a puppy of this age.

As previously mentioned, pups are born with their eyes closed and do not open them until the second week of their lives. Even if their eyes are open, they can’t see very well right now. Their eyesight improves when their eyes open wider, and if you look carefully, you’ll discover they have gray-blue eyes. And this will not last—pups acquire their adult eye color later in life (which may be gray or blue), and all pups have gray-blue eyes when they are puppies. Their full eyesight improves from around the age of eight weeks.

Puppies are born with closed ears as well as closed eyes. If you’re monitoring the puppy’s growth, you’ll note that their ears open about 14 to 18 days of age. As a result, pups won’t be able to hear anything until they’re far beyond their second week of life. Their hearing begins to evolve throughout the first few weeks of life, achieving complete development around the age of eight weeks.

Pups are born with their eyes closed and blind. Their eyes typically don’t function until they’re in their second week of life. When you see a puppy’s eyes open for the very first time, you know it’s the start of a month-long journey of learning and exploring.

Once a puppy’s eyes open, it’s critical to evaluate his eyesight. Toss a cotton ball into the air in front of the puppy once he has opened his eyes. His eye and attention should be drawn to the action. He may not understand what is going on or what the motion signifies, but if a puppy’s eyesight is developing normally, he will follow the movements of your hand as you throw. If you find he has no response or anything that seems wrong, you should get the puppy’s eyesight evaluated by a veterinarian.

Puppies may get infections before they even open their eyes. If you see any swelling or drainage coming from their closed eyelids, you should take the puppy to the doctor or have the doctor make a home visit to check on the puppy. Your veterinarian will almost certainly open the puppy’s eye (even if it hasn’t opened on its own yet) and address the infection with an antibacterial ointment.

Remember that failing to treat an infection may result in long-term vision issues or even blindness, so if you notice a problem, it’s best to err on the side of caution.

Once a puppy is up and moving about, it is easy for them to injure their eyes. This may also occur if anything in the whelping box injures the pup’s eye. There have been reports of newborn puppies experiencing eye discomfort, corneal scrapes, or issues with their eyelashes before they were even a few days old.

If you detect discharge or rubbing after your puppy has opened his eyes, it’s a good decision to get the problem checked out by a vet. Most eye issues are minor if addressed promptly.

Puppies may be born with congenital eye abnormalities. These are some examples:

All of these disorders need the use of veterinary care. A puppy’s eyes are very sensitive and prone to damage, much more so than the rest of its body. Eye disorders may be severe, although most pups recover from abnormalities with their eyes while they are young.

If you address the problem promptly and seek expert help if you detect a problem, your puppy will live a long and healthy life, even if a long-term eyesight problem develops. The essential thing is to have a veterinarian look at anything you believe is out of the ordinary.

During the first few weeks of a puppy’s life, mother dogs perform most of the labor. You’ll be making a lot of effort as a surrogate mom if you care for orphaned pups during the first few weeks. Puppies need feeding every two hours, burping, and assistance with feces and urine. As a surrogate mother, caring for newborn pups is a full-time job. They must be fed every two hours or so, sometimes overnight, and need help with even the most basic body functions. Only in an emergency should a person act as a substitute mother for newborn puppies. A mother dog, even if it is a surrogate mother dog, is always preferable to human care.

These are all things that mother dogs do, and in most instances, even if you are in charge of pups for the first eight weeks of their lives, you won’t have to worry about them.

Puppies are typically withdrawn from their mothers’ milk between the ages of five and seven weeks. They’ve been roaming out from their whelping box for a few weeks now, investigating their environment. If you leave the pups at home when you can’t watch them, keep mom and pups in an exercise enclosure that provides enough room but doesn’t allow the puppies free reign of your house.

It is also critical to get the pups examined by a veterinarian during their first few weeks of life. Even healthy puppies should be examined. Nevertheless, if a dog is not developing at the same rate as its littermates, a checkup is particularly essential. At this age, every indication of sickness should be evaluated by a doctor.

Puppies receive all of their nourishment from their mother during the first three weeks or so of their life. Mother dog’s breast milk has all of the nutrients pups need. Thus supplementing is generally unnecessary. Nonetheless, if a puppy is orphaned or requires more nourishment, puppy formula must be bottle-fed.

When a puppy’s teeth begin to appear, mom will begin the weaning process. She knows it’s time because she can feel her teeth clench as she feeds. When a mother dog pushes her pups away from the food, it is generally a sign that the teeth are coming in. Puppies will continue to feed for a few weeks after their teeth have emerged, although it will be less often. And now is the time to start transitioning the puppies to canned food or kibble.

“What to Feed a Dog with Kidney Failure“

Essential Things Puppies Require in Their First Weeks of Life