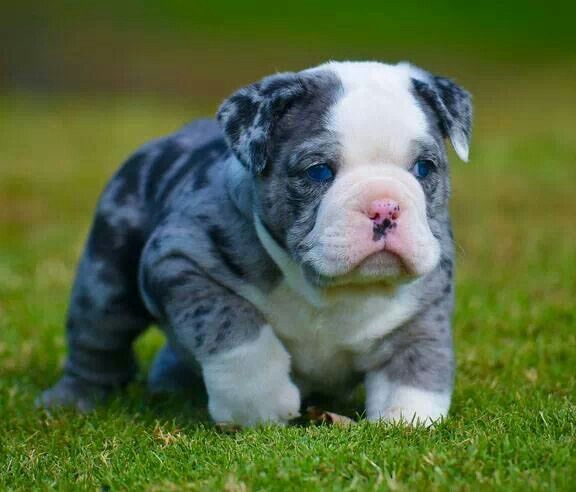 If you’re searching for a new member of your family, Blue English Bulldog is among the most popular choices. Their size, personality, and exercise criteria are a few of the ways this dog stands out of the bundle.

And before you hurry to sign the forms, you have to make absolutely sure that you make an informed choice. Let’s look at the more interesting factors of the Blue English Bulldog to help you do this.

In this article, we’re going to start looking at all the things related to Blue English Bulldogs. Along with some general knowledge about personality and traits, a few other tips on training as well as how to set up your home, and an in-depth look at health problems and how to take appropriate care of them.

Let’s start with a look at the physical characteristics of the Blue English Bulldog. The biggest distinction between this breed and the other species of English Bulldogs is the hue of the fur. In this scenario, you will notice that the dog has a blue/grey coat.

When you rub the dog, you might notice they also have a fawn undercoat. You’ll further notice that their footpads, nose, and eyeliner will be blue, as well.

The actual shade of blue would often vary depending on the type of Blue English Bulldog you buy. You may also note that the Blue English Bulldog appears to have a rather wide head. The eyes are round and equally distributed. While their color is always darker, the precise hue often varies mostly on the breed.

Across their faces, there are numerous wrinkles and folds of extra skin that many owners want to play with as they pat their puppy.

They also have very strong, muscular legs, their shoulders broader than their hips. Just because of that, they’re going to have a strange, ungainly walk. It may also appear to many people that dogs are waddling, instead of walking.

Their thin hips are one of the factors why Blue English Bulldog appears to be more costly than other breeds. It will also be difficult for a female to give birth. As a consequence, they may also need to have a C-section delivery to ensure sure the mother and the puppy are healthy. This will also be costly surgery.

It is also necessary to keep in mind the size of the dog. Blue English Bulldog is going to be a very short, portable dog. They may generally grow to between 12 and 15 inches at their shoulder.

This makes them well matched to live in homes since they don’t require a lot of room to move around.

Though they might just be small, you shouldn’t be deceived into believing that they’re going to be light. You will often realize this when you pick them up. In most instances, it weighs between 40 and 50 pounds. That being said, because of their cute faces, they also get a bit more overweight.

You ought to take into consideration the dog’s temperament because you’ll be able to ensure that you will be providing an adequate home.

Luckily, the Blue English Bulldog happens to be a very docile dog and would be very easy to slot into so many lifestyles.

The English bulldog was initially bred for bull baiting, which requires an energetic dog. Nevertheless, after the brutal sport was banned, the breeders concentrated on making them a perfect family pet.

They are loving and cheerful today, making them a great option for your home, particularly if you have children. However, considering their calm disposition, they still have some passive-aggressive characteristics. The only approach to handle this is to engage them in a training curriculum at a young age.

In most scenarios, the Blue English Bulldog would be very smart and able to respond to orders. This makes it easy for them to train.

The Blue English Bulldog is a beautiful couch potato once you make them tired. In most instances, they would spend their day tucked up in a warm position and fall asleep.

This makes them a perfect lapdog since they’re going to love to cuddle with you and enjoy a film. You’re going to have to note the Blue English Bulldog has a distinctive face. They appear to drool because of this. They love to express their appreciation by licking you, too.

Another explanation people would enjoy this dog mostly because of the low to moderate exercise that is necessary. The amount of exercise needed depends on the type of dog.

Many puppies, for example, would have more energy to burn than older ones.

Typically, however, you’re going to have to give your Blue English Bulldog at least 20 minutes of action a day. In certain situations, you would be able to tire them out quickly. It’s not uncommon for a bulldog to stop in the middle of a contest so that they can fall asleep.

And, since they don’t have to spend a lot of time outside, they can be a perfect alternative for someone staying in an apartment.

It is worth remembering that the Blue English Bulldog has a shorter face and a flat nose. This will also mean that it’s going to get warmer quicker, leaving them vulnerable to overheating. Because of this, you may want to make absolutely sure that you try to walk for them in the afternoon as the temperature begins to decrease.

You need to be sure you’re maintaining them appropriately with any dog.

This will imply that you’ll be able to keep them balanced. Although they seem to have a very short coat and don’t shed much, you’re always going to have to brush it. This would make sure you eliminate any dead hair.

Generally, you’re going to need to brush them once a week.

The most critical aspect of grooming, though, is to wipe them clean. Bacteria may also get trapped in the folds of their skin. This can trigger future health complications.

You would even want to be sure that you take note of their oral health. This can involve cleaning their teeth or offering them a treat so they can suck to rinse their mouths.

To make hygiene a little simpler and a little more relaxed for them, you might want to get some doggie-specific grooming products. Having a dog-specific shampoo is a wonderful start, and there are even dog dryers to render a breeze after a swim.

If you’re attempting to offer your Blue English Bulldog a unique style, you can even get some dog clippers!

Overall, the Blue English Bulldog appears to be quite healthy. Although, as they get older, the risk factors of conditions such as hip and joint problems will significantly raise.

To avoid this, you will need to talk to your vet regularly to make sure that you will be able to identify these issues earlier.

The other thing you have to carefully monitor is their weight. They tend to be fed frequently because of their cute face and lovely personality.

This, together with their low workout criteria, will increase susceptibility to weight gain. This can often be a significant contributor to other conditions of health.

You don’t have to have a huge garden, as we stated. In fact, the Blue English Bulldog is going to be very pleased to live in an apartment.

That being said, there are a few things you have to do to make absolutely sure they have a comfortable environment.

Initially, you might want to ensure they have access to water and a shady place to unwind. It’s important to keep in mind that they’re not going to like hot or cold weather. It can mean that you’ll need to leave the air conditioner if you’re at work. You also might be able to use a dog coat during the winter

When you begin to look for a breeder who owns the Blue English Bulldog, you will realize that it can be quite costly and difficult to locate.

Based on where you get them from, you would be forecasted to pay a lot more than $5,000 for a dog. Although it seems like a lot of money, there are a few explanations why it might be so pricey.

First of all, bulldogs strive to have very large heads. As a result, it is usually not possible for females to give birth normally. As such, the breeder will have to pay for the C-section. This can also take some cautious breeding to make absolutely sure you get blue/grey-colored fur.

If you wouldn’t want to pay these exorbitant prices, you might want to consider calling the adoption agencies in the region if they have any Blue English Bulldogs available. In most instances, you’re going to be able to rehome from these activist groups at a much lower price than buying from a pet shop.

Like people, dogs make lousy mistakes and find themselves harmed or wounded, and the Blue English Bulldog is no exception (no matter how intelligent they might be!).

And, sadly, much like us, dogs may get sick with disease or illness. Trips to the vet should be included in the expense analysis anytime you plan to get a puppy.

Of note, it’s still a smart thing to exercise preventive health treatment. We addressed the dangers of obesity because making sure your dog is consuming the correct amount and walking will do good for their wellbeing and vet costs as opposed to physically active dogs eating low-grade food.

Please make sure that there’s no excessive wear and tear on your Blue English Bulldog knees, which will help boost their well-being in the long run.

If there really is a lot to get in and out of cars or up and down today, it can be a great investment in dog ramps or dog stairs as well.

Summary: The Blue English Bulldog will be an outstanding friend. They’re nice and they love to be with people, and they always get along very well with children.

They’re even going to be well suited to anyone in houses or those who just have a tiny backyard. Because of their lack of grooming and minimal workout needs, almost everyone will hold them.

So, if these characteristics appeal to you, suggest introducing a Blue English Bulldog to your family.